Titan is the main antagonist of Shadow Fight 2. He is the conqueror of worlds and the final boss of the game. He makes his initial appearance in the game intro and he appears in the map after the Gates of Shadows are closed. Titan resides in the Shadow World. The Gates of Shadows, along with the Shadow Energy, belong to him.

Titan appears as a very tall, bald man in heavy, gold-trimmed black metal armor with electrical cables built into his body. He wields a giant sword named 'Titan's Desolator'. In the intro and cutscenes, his armor is completely gray instead.

In the introduction, Titan is seen wielding a massive sword - but in his avatar, his sword is not visible. This is unusual for demon bosses, as they are usually depicted wielding their weapon of choice. Instead, Titan is seen holding a mysterious, blinding orb named the 'Eternal's Sphere'.

Titan has conquered many worlds before he found the Shadow World. His method is invading a world using an army of mind-controlled creatures from the previously conquered world. He then put the defeated inhabitants of that world under his mind control, turning these inhabitants into his army that will conquer the next world for him. When he arrived at the Shadow World, Titan faced an obstacle; the natural inhabitants known as Ancient race with a mind and will strong enough to resist his control. Unable to neither bend their mind nor making an army out of them, Titan destroyed the whole race instead. However, one of them survived and managed to stay hidden from Titan.

Titan himself could not get out of the Gates. To overcome this, he needs a person with a will strong enough to retain their mind and not enslaved by the power of shadow energy. Said person will then gain the ability to walk between worlds and Titan will take that power for himself. After many experiments, one warrior finally managed to not only survive the most powerful emission of shadow energy from the Gates, but still retained his mind and will: Shadow.

Following his intuition, Shadow walks straight into Titan's trap. When he closes the Gates using the demon seals, Titan pulls May into the Gates using some kind of force field right before the Gates are closed. The force field allowed May to pass through without losing her body, as Titan needs her alive for his plan to continue. Titan then puts May under his mind control, turning her into his servant under the name "Justice".

Just as planned by Titan, Shadow follows the call of his heart to rescue May and he goes through all the troubles to re-open the Gates. Due to the protection of shadow energy, Shadow made it alive through the Gates and he arrives at the Shadow World. Titan then orders Shroud, one of his best fighters, to take Shadow to him. However, he fails because Kali interferes with the Energy Ball magic and Shadow escaped. After Shroud's failure, Titan orders Justice to retrieve Shadow this time. She fails as well after Cypher locked her in the Hideout. After witnessing what Titan has did to May, Shadow proceeds to confront Titan in his citadel, disguised as his soldier.

His cover is blown when the Scavengers around the citadel recognize the pure shadow energy covering Shadow's body. Knowing Shadow will come to him, Titan greets Shadow and explains that Shadow is a succeeded experiment. Shadow has gained the ability to walk between worlds as Titan had planned and he wants to take it from him. But before that, Titan introduces Shadow to his bodyguards, his previous experiments. They came from parallel universes and shared similar traits with Shadow and, like him, were able to survive the powerful emission of shadow energy and pass through the Gates alive. However, unlike him, they did not have a strong enough will power to control it and ended up getting corrupted by the energy. Titan pits them against Shadow to show him what he could become if he allows shadow energy to possess him.

After Shadow defeats all of Titan's bodyguards, Titan admits that he did not expect Shadow to be victorious against his dark-halves. Titan is very impressed and says that Shadow is incredible, his capability is unimaginable. To test Shadow's limits once more, he summons May, who has escaped from the Hideout. After a challenging fight, Shadow defeats her and Titan's control over May breaks. Kali tells May to go back through the Gates, saying that after freeing her, Shadow has only one thing left to do - slay Titan once and for all. Although reluctant at first, May finally leaves.

Because Titan lost all of his cover, Shadow is able to confront him. Titan goads Shadow by saying that after Shadow loses he will let him live only long enough to witness his vast empire. He makes the mistake of underestimating Shadow and holds back, making simple attacks with his Desolator, which gives Shadow the upper hand. After Shadow wins the first round, Titan activates his shield which blocks one incoming damage then deactivates itself until charged. He uses his extendable arm to catch Shadow and magic mind throw to grab and choke him, despite everything Shadow prevails. After a long fight, Titan is defeated, falls to his knees and dies with a great explosion. Shadow is caught in the explosion. His shadow body is destroyed and his existence as a shadow is over. He gets his human form back and exits the crumbling Gates of Shadows, where May awaits him.

Titan is stated to be unbelievably powerful. The six demons are terrified of him and hate being his puppets. They are willing to rematch with a deadly adversary (Shadow) to try and prevent Titan from reaching human world. He also possesses a very high level of intelligence. Said intelligence is proven when he is capable of setting up the plan that results in Shadow gaining the ability to walk between worlds and eventually coming to him, essentially making him the mastermind behind everything. Titan is able to mold one's memories, thoughts and will. He has conquered many worlds, and enslaved the inhabitants to form a gigantic empire. The shadow world is only one of many worlds Titan has conquered.

Titan has a vast army, made from those whose minds were controlled after Titan defeated them, and the warriors hatched at the Incubator. Titan is the supreme ruler of his worlds, and his army is ranked in hierarchical order, from the enslaved to the elite soldiers who he commands personally, and finally Titan himself.

Although Titan's powers are greater than all adversaries in the game encountered so far combined, he still has his limitations. When Titan arrived at Shadow World, there lived a race of powerful Ancient creatures, with willpower so adamant not even he was able to penetrate it. However, this is the only known instance where Titan's power was insufficient to bring his plans to fruition.

Titan is a very cunning character. He is also arrogant and offensive, but still, he seems to be very experienced from his experiments on his prisoners and wise, having a large knowledge of the universe and worlds.

Titan wields a giant sword, uses his extendable arm as a ranged weapon, and uses Mind Throw as his magic. Titan is a unique enemy; he does not use any moves or attacks that other enemies or the player uses apart from basic movement. He is 1.5x bigger than normal enemies. He cannot be thrown nor knocked down; critical hits, explosions (from Time Bomb enchantment or Landmines), earthquake, electric shock, and even the strongest blow of Tempest Rage only make him stumble. He has his own special moves: a headbutt, a ground stomp, his extendable arm (which acts as a grappling hook to bring the opponent closer) and a mind throw.

Titan has a massive amount of health and it takes an extreme amount of damage and time to defeat him. He moves very slowly. He is also unable to roll, duck, jump, or flip, making him a vulnerable target for ranged attacks and magic. But this is easily compensated for by his huge health and endurance. In addition to that, he is also extremely aggressive in combat, despite being slow.

Titan has several unique attacks completely different from any other enemies. His throw attack is an incredibly brutal version different from the usual throw that normal enemies use, where he grabs Shadow with one hand, headbutts Shadow, dealing a hefty amount of damage, then slams him into the ground, dealing yet more damage. It is worth noting that this attack always makes Shadow drop his weapon, but it does not count as a shock because interestingly, Titan actually kicks the weapon back to Shadow after he gets up.

His ranged attack is an extendable arm where he fires his hand like a grappling hook. If it grabs Shadow, it deals a light amount of damage, and he pulls Shadow back to himself and brutally impales Shadow with the Desolator, then kicks Shadow backwards. The player should be cautious because the grappling hook can retract if it fails to grab Shadow but on its way back, it can still grab Shadow.

Titan's Magic is a cruel magic named Mind Throw. Titan fires a blue orb at Shadow, and if Shadow fails to avoid it, the orb envelopes Shadow's head and neck, mercilessly choking Shadow, which deals a huge amount of damage. Titan then raises his fist up and cruelly holds Shadow in mid air for a while as Shadow futilely tries to break free, then slams Shadow back into the ground, dealing yet more damage. This attack also always makes Shadow drop his weapon, but curiously it does not count as a shock and Shadow picks his weapon back up.

When Titan defeats Shadow in a round, he laughs in a sinister manner. When he is defeated by Shadow in the first or second round, he sinks onto his knees but still does not touch the ground. On the third defeat, however, Titan finally crumples and shuts down. 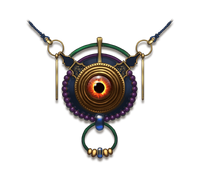 Shield is Titan's unique perk. When Shadow wins the first round, Titan gains a recharging shield that avoids all the damage from one hit, regardless of the power or damage of the hit (including hits from Time Bomb and Tempest Rage's fully-charged blow). After that, the shield has to recharge for another use. The shield requires 8 seconds to be charged. After the player wins two rounds, Titan's shield only requires 4 seconds to be charged, making the battle much harder.

A chance on every successful Sword hit to replenish Titan's health by 250% of the damage dealt to the player.

A chance to increase his magic recharge from taking a Head hit by 700%. Appears after Titan loses one round.

A chance to weaken player's attacks by 75% for 10 seconds after a successful ranged attack or magic hit.

A chance to weaken player's attacks by 75% for 5 seconds after a successful magic hit. Replaces Enfeeble on his magic after Titan loses one round.

A 50% chance to block all damage from an incoming ranged attack.

A chance to avoid a death blow, replenishing a small amount of Titan's health instead.

All attacks and moves of Titan are unique and special to him. None of the other bosses, characters and the enemies use them.

Awarded for winning a fight with Titan once more in Eclipse mode.

During the battle with Titan, the track “Titan Epic Fight” plays.

Titan blocking attacks with his sword.

Titan stabs Shadow with his sword.

After the magic attack.

If player fails to defeat Titan, Ancient appears to save them.

Titan's last moment and cause of death.