In Shadow Fight 1, the players could purchase weapons, Items, Seals, Locations and Silhouettes from the Shop. These were used to enhance the player's fighting experience. Items bought from the shop could not be sold.

Weapons were a type of gear that enhanced the damage dealt to enemies. Certain types of weapons were required for tournaments and for fighting demons. 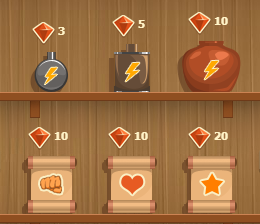 Items found in this section were consumables. They could only be used once and acted as bonuses to temporarily enhance the player's fighting experience. The items sold here were mainly used to replenish the player's energy or Ki. Scrolls which boosted the player's attacks during battle could also be found here. 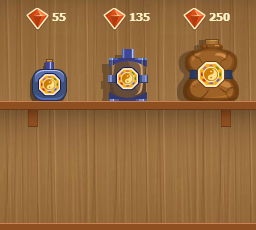 Items sold in the "Other" section would boost the player's attack power while fighting bosses or demons. Seals to fight bosses such as Butcher, Huntress and the Wanderer could also be found here.

At the Silhouettes section, players could customize their character.

Retrieved from "https://shadowfight.fandom.com/wiki/Shop_(SF1)?oldid=58818"
Community content is available under CC-BY-SA unless otherwise noted.