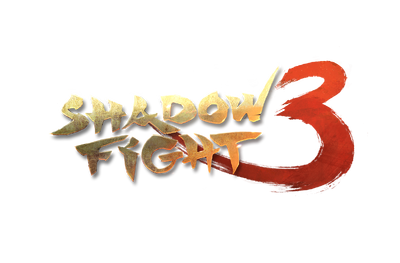 Shadow Fight 3 is an action fighting game developed by Nekki. It is the sequel to Shadow Fight 2. After an extensive beta-testing, the game was released in Canada on July 17, 2017, in India on October 27, 2017, and later worldwide on November 16, 2017.

Unlike its predecessors, Shadow Fight 3 does not utilize flat 2D black shadows to represent fighters. Instead, they are now rendered as lifelike three-dimensional characters in a richly animated 3D environment. The shadows, however, still exist and can be accessed via a new mode known as Shadow Form. While in this form, the characters can become a shadow and are able to perform spectacular physics-defying moves based on the equipped item's Shadow Abilities.

Years have passed since the events of Shadow Fight 2. People have gotten used to the presence of Shadow Energy in their lives and have learned to use it to their advantage, both in war and in their day-to-day lives. Unfortunately, this positive attitude is not shared by everyone. Powerful Legion is preparing for an attack on the Dynasty's lands in order to put an end to what they see as the "Shadow Threat". On the other hand, the people of the Dynasty believe that, with the correct use, this power will help humanity solve a lot of problems. A third faction has emerged from the shadows in the background of these events, the mysterious Heralds. These warriors in black clothes know about the nature of Shadow Energy a lot more than others, which frightens both the Dynasty and the Legion... Amidst this turmoil, a new hero has appeared, their past surrounded in mystery and their future unwritten. Destined to discover the mysteries of the factions, they will bring the war to an end and save the world. It is up to the players to decide what kind of path they will walk.

Players start the game as a new recruit for the Shadow Squad, an offshoot of the Legion which does not hesitate from using Shadow Energy. As they progress further, they will come in contact with other factions and will be able to experiment, mix-and-match equipment, learn new tactics, fighting styles and ultimately make the choice that will determine the outcome of the war.

Shadow Fight 3 is the first game in the series to feature a detailed character editor. Players can customize their in-game avatars by choosing their name, gender, facial features, as well as hairstyle and color at the very beginning of the game. Throughout the game, this player-character will acquire new levels and skills, and develop in the direction chosen by the player.

The game features lifelike, physically accurate fighting action with easy to learn controls. Players can pick and combine what Weapon, Armor, Helm, and Ranged Weapon their characters will use, resulting in hundreds of possible combinations. Each piece of equipment, except for the common variety, comes with its own unique shadow ability. Players can further customize their fighting style by picking Perks and Special Moves suited to their playstyle. All equipment, perks, and moves are classified into different grades: Common, Rare, Epic and Legendary with higher grades usually containing more effective items.

The players can purchase and upgrade these items via four methods: the in-game shop, as rewards from quests, or by opening chests and booster packs. Three major types of currencies can be used to facilitate this process: coins, gems, and Shadow Energy.

The game features three unique fighting schools, each offering dozens of martial arts techniques, weapons, and equipment that the player can gain expertise or combine to create a unique fighting style. The first three chapters of the game focus on introducing the player to these three factions- Legion, Dynasty and Heralds - and their secrets and agendas, after which they must choose between the three.

Aside from the main quests, the game also allows the players to engage in several side quests that expand upon the story and give further information about the world. They may also participate in duels, a player-vs-player mode complete with its own rewards and ranking system. In addition, several special events such as Creepy Party are organized from time to time where players may hone their skills and win Unique gear as a reward.

Players can equip various perks and special moves on their equipment.

A dialogue from the game.

A main quest from the game.

An event from the game.

A fight in Shadow Fight 3.

A boss fight in Shadow Fight 3.

The final battle of Shadow Fight 3.

Booster packs of the game.

Rating points and Dan in Duel.

Players can complete quests to gather keys and unlock chests 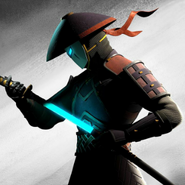 Fourth Avatar (Used during the Blossom Festival 2018 update, and during the Chapter VII update). 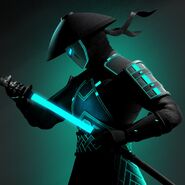 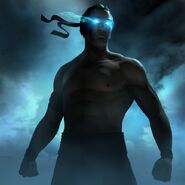 Ninth Avatar (used during the release of update 1.20)