Shadow Fight 2 Special Edition is the special paid version of Shadow Fight 2. It was released on 17 August 2017 on Android and on 22 August 2017 on iOS. This version allows players to get gems easily, with most of the game modes rewarding the player an amount of them upon victory. In addition, Shadow Fight 2 Special Edition features an exclusive storyline: Old Wounds. Also, in this version, players have unlimited energy, meaning they can fight without any limit.

"Now it's your turn to meet Titan in person and put an end to his terror. Walk through the Gates of Shadows into the dangerous world full of memorable fights and brave heroes. These lands are waiting for a risky adventurer to appear and save them from the oppression of a sinister invader from another dimension! Discover a thrilling mix of two world's most popular game genres - Fighting & RPG. Gather a huge arsenal of lethal weapons, combine your gear and upgrade dozens of skills and moves!"

Storyline is same as in Shadow Fight 2, except for Old Wounds, which is unlocked in first 6 Acts after the player wins 3 tournament fights in that act. In Old Wounds, the player takes the role of the young Sensei, the mentor of the hero of Shadow Fight 2: Shadow. It is a story from the Sensei's past, with the Prince. There are three stages of Old Wounds in each act, with the exception of act 6, which only has 2.

One day, Sensei bumps into the Prince, whose soldiers are now controlled by Shogun, and seeks Sensei's help in safeguarding his life against the Lynx. After Sensei's victory against Lynx, and after Hermit's defeat, they learn that Hermit is training Shogun's soldiers for protection of his school from bandits. Hermit tells them where the kidnappers of the Prince (Butcher and his gang) are. Sensei learns that Prince is not very innocent after all and sacrificed other people's lives to save his from Butcher. After Sensei learns the truth, Prince escapes. After Butcher's defeat, he reveals that Prince is after the Sphere and Shogun is waiting for a ship at Wasp's harbour. Wasp reveals to Sensei that Widow is using Shogun and Sphere to get revenge from Prince for not responding to her love. After defeating Widow, Sensei learns that Prince has already got the Sphere despite Shogun's attempt to stop him, in vain. Sensei fights with Shogun, now under the control of the Prince, and after his victory against the Prince, Ancient uses his time travelling powers in order to take the Sphere back.

Differences from the standard version 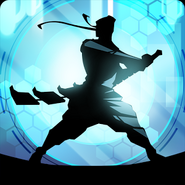