Modes of Play refered to different types of battles available to players in Shadow Fight. These included fights with bosses, demons, Tournaments, player vs player duels and more. Players could access these modes by pressing the Fight button on the interface. This would redirect them to the map where all battle structures were found. Most of these battles required energy and players were rewarded with XP and Gold if they were victorious.

Bosses were enemies that were superior in difficulty to other enemies encountered in Shadow Fight. They could be found in the Boss Fights structure. Bosses possessed higher HP and dealt more damage than regular opponents as they had stronger weapons. Defeating a boss would yield great rewards. The player were given a time limit of 6 hours to defeat their chosen boss. However, there were different requirements to fight each of the bosses. Every battle would costs 40 energy, therefore being in a clan was be very beneficial. After defeating a boss, players had a chance to get fragments of their weapon and could use them at the Workshop to merge into a weapon.

Demons was one of the structures found on the map in Shadow Fight. It offered the players the opportunity to fight the five demons. Like bosses, these demons were harder to kill than regular opponents. Demon battles required 10 Ki energy each. Unlike other regular battles, there was no time limit to finish the demons. Certain weapons were also needed to fight certain demons. Whenever the demon was almost knocked out, players could use charges to increase their damage. These charges could be earned as a drop from defeating one of the demons, or be purchased from the shop. If the player was in a clan, the amount of damage dealt by other clan members was added to the demon, making it more efficient and easier to defeat them. 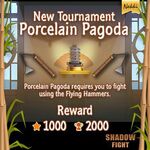 Tournaments helped players gain rating points and XP. There were 29 tournaments available in the game. In each tournament, players had to battle random players. Usually they had to spend some of their energy points and gold before starting the tournament. Most tournaments could only be unlocked if the player had enough rating points.

Players had to fight without equipping any weapons. However, Shurikens and Kunais could still be used. Players earned 25 XP and 10 gold upon winning.

Unlike normal battles, this type of battle did not require energy. Players were able to control 2 players in this battle.

Unlike normal battles, this battle would cost 10 energy points but did not cost coins. Players were able to fight against their friends.

Players, in order to increase their Dan, had to undertake the Dan Test. Players had to defeat opponents in succession to pass the test.

The Gate of Shadows was a final battle against all seven bosses in Shadow Fight 1. One seal from each boss was needed to unlock the battle. It could be played at any time as long as the players had all seals needed. Once opened, the player had to fight and defeat all the bosses, one round per boss. If victorious, the players were rewarded with the Sword of Shadows.

Shadow Arena was a game play mode in Shadow Fight. It allowed users to enter special tournaments if they had enough gold. There were three tournaments: Lone Lotus, Mark of Ninja and Master Sigil. There was a time limit and the player had to defeat three enemies. Time left, player's health, damage done, and victory/defeat at the end of the fight would affect the player's score. Players with the highest score in the tournament would get the most valuable prize, the player who finished the tournament with second highest score got the second most valuable prize and so on. The prize was lowered as the total score decreased until it eventually became zero. Therefore, many players with low scores were not able to receive any prize. Maximum players allowed in a tournament was stated and decreased with each tournament while prizes and the cost of entering increased.

In Shadow Fight, players would receive a daily quest named "Today's Quest". It could only be completed once a day. Players receive an award or an energy potion upon completion (previously they would earn glory).

The Tower of Death was one of the modes of play in Shadow Fight. It allowed the player to use weapons for battle. This mode was similar to Survival in Shadow Fight 2 but the player could fight an infinite number of enemies. The reward for defeating each enemy was 5 coins.

Players started the Tower of Death with 150 seconds. They had to defeat as many opponents as they could. Once the player defeated an opponent, they would win that round. At the end of the Tower of Death, players would earn coins and XP for clearing rounds. (If they beat their previous record, they received a bonus).

The timer did not reset for each round the player completed and would continue to run down. Players would also gain a small percentage of their health back upon completing a round. The game ended when the player's health was completely depleted or the timer ran out. 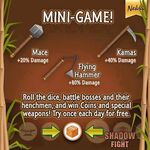 Players would also encounter some of the bosses. When the player defeated the boss, they would earn a weapon. The weapons that could be earned were the Maces, Kama or Flying Hammers.