May is a main character in Shadow Fight 2. She is met in Act I, after Shin is defeated.

May is the one of the two characters who has eyeballs in the entire series. However, her eye color is light green. She has orange hair that bangs in the front. She also has a voluptuous figure that's highly noticeable in the video clips.

May has a kind, cute and caring personality, especially towards Shadow whom she later ends up at the end of the series. She is brave as well. She is intelligent in several aspects, especially in weapons. That is her original personality. However, after she got seized by Titan, her personality completely changed and she became insane and ruthless. Shadow faced hard time fighting with haspects, especially strategic and was greatly aware of Shadow's fighting style. That said, her badass side was revealed back there. After being defeated, she got back to her normal state.

May introduced herself as the local armor and weapons expert of Act I's town, and insists that Shadow should take her along on his journey. She promises to make sure his equipment is in good condition and on the journey, she serves as the assistant of Shadow and a person who generally has a deal of information to provide on mysterious subjects. She gives information about Tournament, Challenge, and other things so that Shadow could improve himself and defeat demons more easily. She is quite vocal regarding her opinions and speaks her mind freely.

After they reach the Gates of Shadows, Sensei informs that only someone with flesh and bones can seal the Gates. May reluctantly volunteers to close the Gates after Sensei and Sly refuse to do it. As the Gates begin to shut, a powerful torrent of wind rushes towards them and drags May along with it. Shadow tries to catch her, but she is whisked away inside the Gates just as they slam shut.

In order to save May, Shadow must open the Gates once more. Sensei tells Shadow that it seems the seals were connected to their Demons, so Shadow must defeat all six demons again to break the seals and reopen the gates. After he defeats all of the demons once more, Shadow proceeds to enter the opened Gates to save May.

Justice is the name given by Titan to May during the time when she is under the influence of Titan's mind control. Being mind-controlled, she is pure evil, just like Titan, wants to take revenge from Shadow, and kill other rebels. Her eyes are completely white just like every demon in the game. She wears a blue colored technological Armor. She appears at the middle of Chapter 2, and at Chapter 3, she unmasks herself and is fought as a mini-boss.

After Shroud has become insane, Justice is sent by Titan to neutralize Shroud and capture Shadow. When Shadow wins the Incubator tournament, he receives news that Shroud has broken into the Hideout and holds Cypher and the others at ransom, demanding that Shadow fight him. Shadow agrees to the challenge. After Shroud is defeated, Justice appears. She orders that Shroud be placed in the Incubator's feeding tube to "serve as nutrition for a new generation of Titan's military". Afterwards, Justice recognizes Shadow as an extraordinary fighter and commends his style, saying that despite his disguise, she knew who he was all along. It is then revealed that Justice is May. Completely under Titan's control, her eyes are now white like a demon. She asks Shadow if he wishes to take Titan's place. Then she sees Kali and thinks that Shadow had already moved on and found a new "girlfriend". She says that Titan was right about him all along - Shadow is not saving the world, all he wants are "chicks" and "power". Kali rebukes May and tells her that she is nothing but Shadow's liaison officer and that Shadow had come across the Gates for May. Cypher interrupts, revealing that he had now activated the Hideout's defense circuit, effectively trapping May. She realizes that she has been tricked and threatens that Titan would kill them all. Cypher states that May had lost her mind because of Titan and as long as Titan holds grip over her mind, she will remain like that.

After all of Titan's bodyguards are defeated, Titan summons May, which surprises Kali. May reveals that she killed her captors back at the hideout and managed to escape which enrages Kali. May tells her to restrict herself as she has brought Cypher to watch her fail and challenges Shadow to a fight with her. She taunts him by saying that she doubts Shadow can win as she knows all his fighting styles. After a challenging fight, Shadow defeats her and Titan's control over May breaks. Kali tells May to go back through the Gates, saying that after freeing her, Shadow has only one thing left to do - fight Titan. Although reluctant at first, May finally leaves.

May anxiously awaits Shadow's return after she returns from the Gates. As the Gates begin to crumble, she spots a silhouetted figure emerging from the dust and rubble - Shadow has not only managed to avoid the explosion and return through the Gates, he has also got his physical body back. The two hug and then decide to return home.

May is fought in Act VII: Chapter 3 as a mini-boss. The players must defeat her before they can challenge Titan. Two rounds must be won in order to win. There is a total of three rounds that can be fought. The timer for each battle is 99 seconds, as per usual conditions.

May can become invisible after blasting a puff of smoke around her and stays the same until player damages her heavily. When invisible, May will not use ranged weapons and magic. But she still can shoot energy missiles with the Blaster Tonfas.

May has the ability to teleport by which she disappears in the cyan beams coming from her weapons and shows up attacking from the back. Replaces Invisibility after May is defeated once.

A 10% chance to increase Head Hit damage by 59% for 5 seconds after dealing a Head Hit.

A 40% chance to bypass players' blocks.

A 100% chance that during first 3 seconds of a round May's First Strike would reduce players' health by 25%. Appears after May is defeated once.

May's Blaster Tonfas is enchanted with Magic Recharge, giving her chance to increase her magic recharge from a successful hit by 300%.

May's Blaster Tonfas is enchanted with Overheat, giving May a chance in each strike to put a buff on herself that makes her next strike inflict 200% more damage. Replaces Magic Recharge after May is defeated once.

May's armor and helm are enchanted with Regeneration, giving a chance to regenerate 4.5% of her health for 5 seconds after being hit.

May's armor and helm are enchanted with Damage Absorption, giving her a chance to absorb all damage dealt to her body and head by a single strike. Replaces Regeneration after May is defeated once.

May's ranged weapons is enchanted with Weakness, giving her a chance to weaken players' attacks by 75% for 5 seconds after a successful hit.

May's ranged weapons is enchanted with Bloodrage, giving May a chance to deal 200% more damage on her hit, but would also lose 30% of damage dealt in health. Replaces Weakness after May is defeated once.

Awarded for defeating May.

Awarded for winning a fight with May once more in Eclipse mode.

Note: May's conversation during the event may be replaced by Kali if the player has reached Act 7. 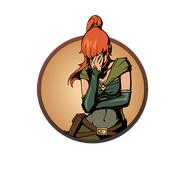 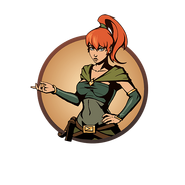 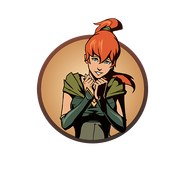 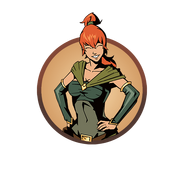 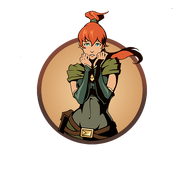 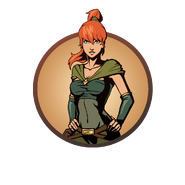 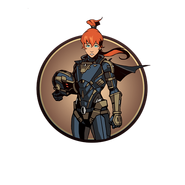 May in Justice outfit 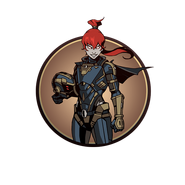 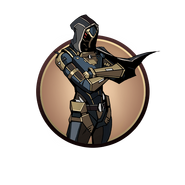