Legion is the name of a faction in Shadow Fight 3. They are introduced in Chapter I. Legion is a warlike faction aiming to destroy the Shadow Energy. Legion live by Spartan laws and would readily accept into their ranks anyone who will not stop at working flat out.

The Legion is a militarist faction. Their aims are simple and clear: eliminating Shadow Energy throughout the world and preventing it from re-emergence. Their ideology is stern: they accept no weakness, give no apologies or explanations for their actions, and are willing to make every sacrifice for the sake of humankind. This is why other factions regard the Legion with little favor, to say the least.

The Legionaries live by severe laws of the army, valuing subordination, dedication and will above anything else. Their belief in human constancy is comprehensive. A true Legionary is the one who rejects all weaknesses on his or her way to becoming great as a warrior, and relies upon strength and unremitting toil. Being one of them is risky, because every next battle can become one’s last. Regardless, the influx of those volunteering to stand under their banners never stops, for there are many willing to become war heroes and saviors of the world. Now the Legion readily accepts everyone who can endure its exhausting training, after which the fighter obtains staunch allies who would stand foursquare behind him or her.

Legionaries fighting style relies on their strength as their primary offense. They prefer heavy weapons and armor, prioritizing brute strength and exhausting training. Legion weapons are mostly heavy and pack a powerful blow, designed to bring the opponent down with brute force. These weapons can be difficult to wield because of their heaviness. Legion armors are made of durable material and therefore are strong and heavy. These armors limit movements, but they fit perfectly with the fighting style of Legion. Legion perks are focused to bringing down opponents as quickly as possible with bruteness. These perks give effects that mostly will increase durability and attack damage.

When performing some attacks with Legion weapons, there will be a short interval occuring, indicated by the character glowing white. During the interval, any hit taken will not cause the user to lose balance, allowing them to finish their attack. The user will still take the damage, and the interval cannot protect them from Critical hit (though mitigated with the rock ability), Shock knockback, or Shadow abilities. The uninterruption interval however, cannot be canceled by Critical hit while the user is airborne (when they use moves that involve jumping such as Guillotine, Snakebite, Avalanche, etc).

Legionaries are characterized by their heavy, bulky armors. 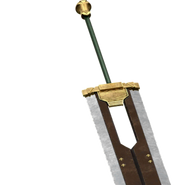 Giant Sword, an example of heavy weapon with high strength.

Shadow Burn, a perk of Legion, reducing both health and shadow energy of the opponent.

A shadow ability of Legion.