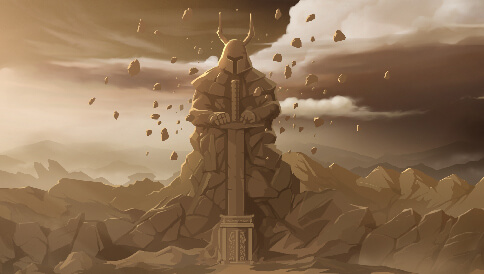 Gates of Shadows is a location and a mode of play in Shadow Fight 2. There is a huge gate under a much bigger statue, with rocks floating around it. The Gates are surrounded by a wasteland. As narrated by Sensei, the land was once fertile, but due to the side-effect of the Gates' presence in the area, it has become barren. The Gates of Shadows, along with the Shadow Energy contained within, belong to Titan.

Shadow discovered the Gates when he was searching for a worthy opponent who matched his skills. Defying the rules established by his ancestors, Shadow opened the Gates - and in the process, released the demons contained inside. Shadow also lost his body to the powerful emission of Shadow Energy unleashed from the Gates, turning him into a mere silhouette of his former self. Seeking to retrieve the demon seals and close the Gates of Shadows once again, he sets to correct his mistake and lock away the evil he has unleashed upon the world.

After a long journey, Shadow manages to defeat all the demons and obtain their seals. He and his companions then proceed to close the Gates. However, the six demons - Lynx, Hermit, Butcher, Wasp, Widow and Shogun - unite to prevent Shadow from sealing them away. Lynx, Butcher and Wasp attempt to intimidate Shadow, with Butcher even goes to the extent of laying claims on Shadow's corpse.

Shadow battles all six demons in a row and proves to be greater than all of them combined. Shogun is once again shocked by their defeat and says that despite being the "most powerful warriors who ever lived", they were somehow still overwhelmed by Shadow. Hermit remarks that Shadow is too powerful and that he does not belong to their world because of his skills. Widow begrudgingly congratulates him on his victory, but warns that this would not be their last encounter.

His path cleared once more, Shadow proceeds to close the Gates of Shadows. As they begin to shut, powerful torrents of dust and debris begin to swirl around them. The characters struggle to maintain their balance, however, at the very last moment, a huge torrent of energy makes its way towards the Gates, sweeping May along with it. Despite his best efforts to reach her, Shadow is unable to help and she is pulled inside the Gates just as they slam shut.

In order to save May, Shadow sets out to open the Gates one more time. Sensei tells Shadow that it seems the seals were connected to their demons, so Shadow must defeat all six demons again to break the seals and reopen the gates. After the seals are broken, the Gates open once again. Sensei admits he feels Shadow is ready and has enough experience to face whatever comes next. After Sensei and Sly bid their farewell to Shadow, he proceeds to enter the Gates, which are revealed to be a portal that leads to another dimension called the Shadow World, ruled by the mighty conqueror Titan.

After May is rescued and Titan is defeated, the Gates of Shadows are destroyed as well. However, a mysterious shadow is seen slithering after Shadow and May from the ruins of the Gates.

The battle of Gates of Shadows is one of the most significant fights in Shadow Fight 2, fought at the conclusion of Act VI. It is unlocked after defeating Shogun. At the Gates of Shadows, the player must battle the six demon bosses once again without breaks, similar to survival, with random rules being applied in each round. The objective is to defeat them in order to clear the path to the Gates of Shadows so that they can be sealed.

New equipment becomes available in the shop after Shogun is defeated and the Gates of Shadows become available. They are unlocked at level 37:

Lynx can become invisible after throwing a smoke bomb to the ground and will stay that way until Shadow damages him heavily. When invisible, Lynx will not use ranged weapons and magic.

Lynx's Claws and ranged weapon is enchanted with Time Bomb, giving him a chance to set a delayed explosive on Shadow, which will detonate after 2 seconds.

Lynx's Claws and ranged weapon is enchanted with Poisoning, giving a chance that Shadow will start losing 3% health per second over 5 seconds after being hit.

Hermit can use a deadlier magic by levitating and meditating. While levitating, he will spin his swords to hit Shadow and make him vulnerable to the lightning until Shadow is defeated or knocks Hermit off his levitation. Since the lightning bolt is considered a magic attack, it does not cause Head Hit or Critical Damage.

Hermit's Swords and ranged weapons are enchanted with Enfeeble; this will allow him to weaken Shadow's attacks by 75% after a successful hit.

Hermit's armor and helm are enchanted with Magic Recharge; this will allow him to trigger a chance to increase his magic recharge by 700% after getting hit.

Butcher has the ability to cause a devastating quake by stomping the ground, which can cause Shadow to fall and take damage. The only way to avoid it is by jumping, or hitting Butcher before he hits the ground. Since it is considered a magic attack, it does not cause Head Hit or Critical Damage.

Butcher's Knives and ranged weapon is enchanted with Bleeding, giving a chance that Shadow will start to lose 6% health over 5 seconds after being hit.

Butcher's body and head are enchanted with Frenzy, giving him a chance to increase his melee damage by 150% for 5 seconds after being hit.

Wasp has a unique flying Perk. With it, she can jump onto either walls during the fight, sprout wings and launch off it, flying and impaling Shadow with the naginata. With perfect timing, the attack can be jumped over, or alternatively, players can either duck or roll forwards/backwards to avoid the attack. Players also can attack Wasp just before she launches off the wall to cancel the attack, but the timing is very short.

Wasp's Naginata and ranged weapon are enchanted with Precision, allowing her to make a Critical Hit with increased damage.

Wasp's armor and helmet are enchanted with Damage Return, giving a chance that Shadow will take 85% of damage dealt on every hit.

Widow has the ability to teleport by which she disappears in the cyan beams coming from her fans and shows up attacking from behind the player. It can be easily dodged by back-handspring or a well-timed roll. The player also can interrupt the attack by hitting Widow before she finishes her teleportation.

Widow's Fans and ranged weapon are enchanted with Lifesteal, giving Widow a chance on every successful hit to replenish her health by 250% of the damage dealt to Shadow.

Widow's armor and head are enchanted with Regeneration, giving a chance to regenerate 4.5% of her health for 5 seconds after being hit.

Shogun can call his bodyguards which will appear from either sides of the screen, make a single strike to attack Shadow, and then disappear. These summoned bodyguards cannot be attacked. Their attacks cannot be blocked as well. However, they can be dodged. The bodyguard is summoned depending upon Shogun and Shadow's position on the battlefield.

Shogun's Katana and ranged weapon are enchanted with Overheat, giving Shogun a chance on each strike to put a buff on himself that makes his next strike inflict 200% more damage.

Shogun's armor and Helm are enchanted with Damage Absorption, giving a chance to absorb all damage dealt to Shogun's body or head by a single strike.

The Gates of Shadows fights feature a fight rule for every fight that is selected randomly. It may be one of the below:

*The fight rule will affect the enemies as well.

The reward for beating each boss is vast, and therefore this fight is an excellent source of coins and Shadow Orbs.

Awarded for closing the Gates of Shadows.