Emerald Claw is a weapon in Shadow Fight 3 introduced in Chapter II. It is a Legendary guandao and belongs to the Dynasty faction. Emerald Claw is a part of the Guardian Dragon Set, which comes with a fight bonus when the full set is equipped. It has 3 item slots which can be customized with applicable Perks and Special Moves. Emerald Claw carries the Twirl Shadow Ability. It is the weapon used by the Guardian Dragon, the name of an elite division of guards in Dynasty.

Players can buy Emerald Claw from the shop for a determined amount of price. It also can be obtained as a random reward after winning any fight in Chapter II, by opening a Chest (better chests have higher chances), or by purchasing the Dynasty Booster Pack. Players must reach level 4 before being able to equip and use it.

Disclaimer: The preview below uses Sentry's Guandao as the weapon. Since both Emerald Claw and Sentry's Guandao are Guandao, they share the exact same moveset, with the only differences being the rarity and design.

Levitates forward in a seated position, with the Guandao telekinetically spinning and slicing horizontally underneath the player like a helicopter blade.

Two special moves are available for the Emerald Claw's item slots. Only one move can be equipped at a time. 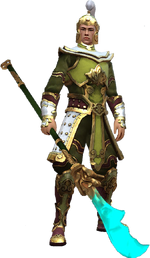 Guardian Dragon Set is a set of equipment from Chapter II which consists of:

Retrieved from "https://shadowfight.fandom.com/wiki/Emerald_Claw?oldid=105239"
Community content is available under CC-BY-SA unless otherwise noted.