Dynasty is the name of a faction in Shadow Fight 3. They appear early in Chapter I, however, they start being introduced in Chapter II. Dynasty is the ruling clan of a highly developed nation. Its capital is a real multinational hive known for its variety of competing combat arts schools. Unlike the other factions, the Dynasty’s approach towards Shadow Energy is practical; they use it whenever it is useful, and do not consider it as something dangerous.

The Dynasty’s capital is a home to a thousand of combat arts schools; a dense anthill of a city where someone combative and charismatic enough can gather crowds of loyal followers. The capital’s pace of life is very rapid. The people of the Dynasty simply know no other way of living. That is why the warriors you will meet are swift and elegant, and prefer lightweight weapons.

The capital is known for its annual combat arts tournament, an event where adepts of various teachings can contend for the crowd’s attention and the benevolence of the head of the Empire.

The latter enjoys special respect of his people. Staking on the Shadow Energy, the Emperor has proved in practice that, if wisely used, it can serve humankind good. To many’s surprise, the country flourished! But the Legion was confused by such volatile disposition. Since then, the two factions fell out with each other.

Dynasty is known for their graceful, fluid fighting style. They generally rely upon dexterity and speed, focusing on dealing as much hits as possible. Dynasty weapons mostly are used in agile, acrobatic style. They are quick weapons with the capability of dealing lots of combos. Dynasty gears are light in weight, allowing them to emphasize fast and powerful kicks, high jumps and generally fluid and rapid movement. Dynasty perks mostly give effects that will give advantages when the user maintains a combo of multiple hits or utilizes an swift, evasive playstyle.

Dealing a combo of 3 hits when equipping any Dynasty weapon will put a buff on the user that will make their next strike inflict double the damage, indicated by a blue aura around their hands. The buff will be gone if the user receives an unblocked attack or after 5 seconds. However, it will not go waste if the user's attacks are blocked. The buff cannot stack. If the user is Shocked, then they cannot utilize the buff for the rest of the round. 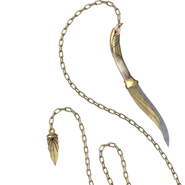 Flurry, a perk of Dynasty, increasing damage output when a Dynastian maintains a 3-hit Combo.

A shadow ability of Dynasty.