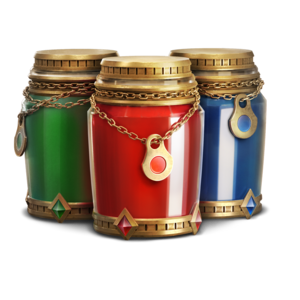 Dyes are a special feature which first debuted during the Prison Break event back in July 2020, along side with skins. A dye allows the player to change the color of their equipment. Dyes come in three rarity variants, Common, Rare and Unique.

A dye can be earned from the Unique Prism or Pack of Colorist. The dye earned is Rare, but the color isn't guaranteed. Other than events, they can be earned far more quickly by using in-app purchases or from the Shadow Pass, it appears as a fixed reward for a certain day. Common dyes have so far only been made available through certain revisions of the Lucky Board, A booster pack from the Halloween event of 2021, or from Sprint of the Key Master marathon.

The latest addition: Unique dyes, were only available through the Lucky board and the event marathon of the Dragon Lesson event held in March, 2022, through special booster packs. They were also added as rewards in the High Society event held in April of the same year.

The amount of dye required to color a set are depends on rarity.