In Shadow Fight, Dan was needed to unlock techniques for the player. It was represented by a belt. Every player started with the lowest Dan and increasing the player's Dan unlocked harder techniques. The maximum Dan level was 10. Players could increase their Dan by passing Dan Tests. 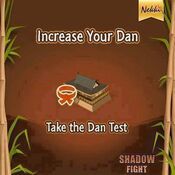 In the Dan Test, players battled against random players. Players could take the test if they had enough friends on Facebook who played the game, or by using rubies. The number of battles the player had to finish was always their Dan level + 1. Like Tournaments and Boss battles, there were no weaponry requirements.

However, like the Tower Of Death, the time limit of 150 seconds would not reset after battles and players only gained back a portion of their health points.

When the player won all battles, their Dan would increase.

Techniques That Could Be Unlocked by Dan