Shadow Fight 1 featured two primary types of currencies. They were gold coins and rubies, of which the latter was the premium currency of the game.

There were several ways to earn Gold, also known as Coins, in the game:

It was primarily used to buy items from Shop or for participating in Tournaments.

Although much more difficult to obtain that Coins, there were still several methods players could use to obtain Rubies: 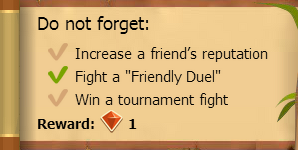 Rubies could be spent in various ways. At the Shop, players were able to use rubies to buy the following items:

They could be used it in the Try Your Luck! section to:

At the Dan Test, if the players did not have enough friends but still wished to participate, they could do so by paying rubies.

Players could also spend rubies at the Shadow Arena to participate in the Master Sigil section.