Armor is one of the five types of equipment that are available in Shadow Fight 2, along with weapon, helm, ranged weapon and magic. Armor reduces the damage dealt to the body, and also increases the damage of unarmed attacks (punches, kicks, and throws).

Armors of unique equipment sets. They are unique in the sense that they carry Mythical enchantments, and collecting these armors along with the other equipment pieces is necessary to unlock their respective mythical recipes.

Armors that are only available during special days or events. Some of them are available for purchase at the shop in the Special Edition. 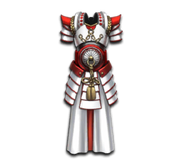 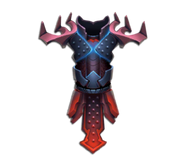 Heavenly Steel Armor
Add a photo to this gallery
Retrieved from "https://shadowfight.fandom.com/wiki/Armor_(SF2)?oldid=106343"
Community content is available under CC-BY-SA unless otherwise noted.