Sole survivor of the Ancient Race

Ancient is a character in Shadow Fight 2 met during Act VII: Revelation. He is the last surviving member of his species - a race of powerful beings who possessed an extremely strong willpower. Before Titan made his mark on the Shadow World, the land was inhabited by Ancient's race among several others. When Titan arrived, he used his powers to change the will of all the creatures in the land in order to enslave them. However, he could not change the will of the ancient creatures, for they were too powerful. Consequently, Titan ordered their extermination. Only one of the Ancients managed to survive and he went into hiding. Cypher built Cronos, an advanced humanoid robot, several years back to track down the Ancient in a bid to defeat Titan. Cronos found him but the Ancient, preferring to remain hidden, changed the will of Cronos effectively putting him out of Cypher's control. Ancient wields the Composite Sword as his weapon.

After Sensei defeats Prince and stops him from wrecking havoc, Ancient appears before Sensei. He had stopped the flow of time and came here to take the magical Sphere back where it belongs, as its presence here was caused by the instability of the Gates of Shadows. Sensei has many questions to ask, but Ancient replies by saying that he will find out the answer one day. For now, he tells Sensei to sleep and when he wakes up, no one will remember his feat. Therefore, Sensei will not be recognized for his deeds.

After finding the Ancient's location via Cronos' memory chip, Shadow and Kali head to the Stone Grove searching for him. However, they encounter Shroud instead who threatens Shadow and mentions their earlier fight, claiming that they have unfinished business to attend to. He then reveals himself to be Ancient in disguise, explaining that he has the power to change the appearance of himself and others. Kali introduces Shadow as the Champion who has come to defeat Titan, but the Ancient does not believe that Shadow is capable of it. He recalls meeting all the warriors who had sought to defeat Titan before. They had all been confident and strong. But later, when Ancient saw them again, they had all become Titan's mindless soldiers, destroying the very homelands they had sought to protect. Ancient summons the ghosts of the warriors who fell to Titan as a test to find the extent of Shadow's capabilities. Shadow defeats all the ghosts and Ancient admits that Shadow is indeed a very powerful and skilled warrior. He then still asks Shadow not to fight Titan, and disguises him as one of Titan's soldiers to help him escape notice. Kali wonders if Ancient really believes that Shadow will stop in his quest. Ancient admits that his need to stop Shadow is much greater now, because Titan must not be allowed control over a warrior as formidable as Shadow. He challenges Shadow to a fight but is defeated. He then admits that Shadow is indeed even stronger than Shroud, as Shroud could not manage to defeat the Ancient. Kali and Shadow are surprised to learn that Ancient had taught Shroud. Ancient further reveals that he had believed Shroud could defeat Titan but instead Titan made a slave out of him. Kali asks Ancient if he trusts Shadow now, to which the Ancient replies that it had been a long time since he had believed in anything, and tells them to leave as he had nothing more for them.

Ancient appears to save Shadow, if he loses to Titan. He stops the flow of time so that Shadow can escape and have another chance at defeating Titan. It is later told that Ancient has finally left the Stone Grove to fight his own wars.

If player fails to defeat Titan, Ancient appears to save them. 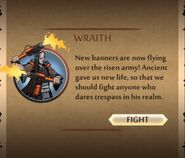 Wraith tells that Ancient had trusted them to guard stone grove. 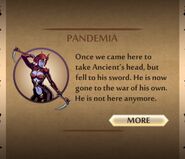 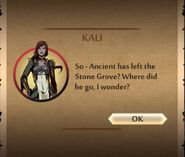